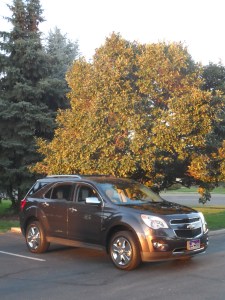 This past week I was presented a new Chevy Equinox crossover to test.  It was painted Tungsten metallic (dark bronze) with a light titanium and black leather interior.  The combination resulted in a lot of compliments during the week, although personally I’m a fan of red, white or black vehicles.

Chevrolet was founded 100 years ago last fall and globally they sold nearly five million vehicles in 2011.  The Equinox was brought out as a 2005 model and is classified as a mid-sized crossover.  The 2013 model is considered a second generation Equinox, and features a new “high-feature LFX” 3.6 liter V-6 with 301 horsepower and 272 lb. ft. of torque.  It replaces the old 3 liter V-6 without sacrificing fuel mileage and is rated at 16/23, city and highway.  Zero to sixty acceleration with the new Equinox is reportedly 7.2 seconds in this all-wheel drive model.  I liked the engine and its pep, and found the transmission (six speed automatic) to be OK.

The Equinox is a five-passenger vehicle with  fold down rear seat (not quite flat), providing 63.7 cubic feet of cargo space in such a position.  It also slides 8” fore and aft; great for kids.  Put it up, and you cut the cargo space in half.  It’s still adequate, though, and the power up and down tailgate is a luxury feature.  So are the two-tone front leather buckets, which I think would keep the driver comfortable on a long trip.  With the center stack slanted so far forward, I found the driver needed to lean forward to tweak the radio or navigation controls.

The Equinox carried an M.S.R.P. of $36,385, and that included $1,500 for V-6, $1,000 for the chrome-clad aluminum 18” wheels, $795 for the nav/MyLink system, and $825 for freight.  The LTZ came standard with a luggage rack, fog lights, power seats-mirrors-windows-locks, tilt/telescope, rear camera and premium Pioneer stereo.  Also on board were radar cruise control, lane departure warning system, Bluetooth, XM satellite radio, and a USB connector.

Ruth and I took off up the Interstate to find some breakfast in the Chevy, and the guidance and ride were excellent.  Road noise was not remarkable
and the hydraulic steering seemed to make the car light on its feet.  Visibility is nothing special, but not an annoyance.  Styling is a hallmark of most Chevrolets, and the Equinox is no exception.  An improvement was the result of the 2009 re-design, and it and its sister, the GMC Terrain, make up a stylish tandem in this category.  It allows General Motors to charge a little extra for this series of vehicles.

Sales of Chevrolet’s Equinox has always been brisk, approaching 200,000 units in 2011.  After spending several miles and a week with the car, I can understand the public’s acceptance of the Chevy, and could see myself driving one on a daily basis.