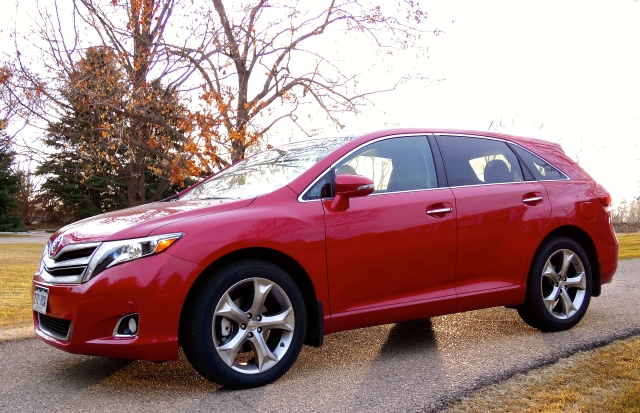 A test car that was delivered to me recently was a 2015 Barcelona Red metallic five-door Toyota Venza with all-wheel drive and a V-6 engine.  Since the Venza was introduced into the Toyota line six years ago as a 2009 Camry derivative (one of many), the company has chosen to dress the car out with lots of equipment.  And the one that I was loaned had enough in the line of options to bring M.S.R.P. to $42,193.00.  Included was the Limited package of options were leather seats/shift knob/steering wheel, twin power heated front buckets, smart key system, pushbutton and remote starter, power liftgate, backup camera, navigation system, 13-speaker JBL stereo, XM radio, automatic high beam headlights, panoramic glass moon roof, IPod connector, Bluetooth, and rear bumper protector.  The car also had  chrome door handles, puddle lamps, fog lights,  four-season floor mats, paint protection film, and mudguards.  On balance, it was quite a number of upgrades.

First off, I departed for Denver out on I-25 on a winter morning.  I wanted to meet my family for lunch at Zadie’s Restaurant near Cherry Creek.  The Venza has a 268hp V-6 (@ 6,200 rpm) with 3.5 liters, dual overhead cams, 24 valves and dual variable valve timing.  Torque is 246 lb. ft. (@ 4,700 rpm) and the the transmission attached to it is a 6-speed electronically controlled model with with sequential shift mode.  All of this drivetrain spec provided ample passing power and I was satisfied with the Venza’s ride, guidance, and handling.  Dual climate control kept both the wife and I comfortable and the tilt/telescope kept the wheel in a proper attitude for the driver.  This upgraded Toyota had carbon fiber-looking trim in quite a few locations in the car and it was very attractive.  So was the dashboard material and gauges.  And the cargo space behind the second-row seating is 36.6 cubic feet.  Fold the middle row of seats down and the total cargo space comes to 70.2 cubic feet.  Weight/wheelbase/length of the Venza is 4,045 lbs., 109.3″, and 189″, respectively.

Fuel mileage for the Venza is 18 mpg city, 25 mpg highway, and 21 mpg combined.  I observed an average of 22.4 during my week with the car.  I mentioned the acceleration – reportedly the Venza V-6 goes 0-60 in 6.9 seconds, without a great deal of fuss.  The car rides on big 20” five-spoke silver allow wheels that look great, shod with P245/50R20 Goodyear Eagle RS-A all-season steel 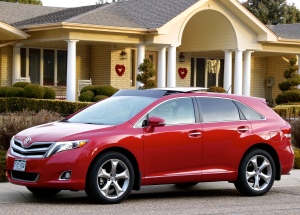 belted radials.  And the drive system is all-wheel with Active Torque Control and the suspension is 4-wheel independent MacPherson strut with stabilizer bars.

I left Zadies less satisfied with the lunch (breakfast, actually – I don’t care for the pancake syrup) than the car, and noticed a lot of looks from shoppers in the Cherry Creek district.  The Toyota Camry has produced a lot of offspring, and the Venza is the best-looking one of the bunch. 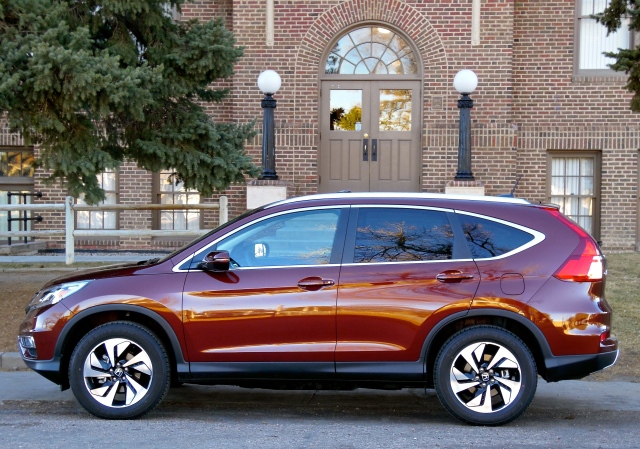 Japan’s Honda Motor Company began as a motorbike manufacturer in 1949, and by 1962 they produced a motorcycle that caught the fancy of my big brother, a 150cc black bike with twin cylinders.  By 1964 the company became the world’s biggest motorcycle producer and that year I joined my brother and purchased a 50cc Honda, later trading it for a 1965 305cc white “Dream”.  Another brother bought a similar, blue Dream and the three of us terrorized the streets of Albion (and Grant) Nebraska for years thereafter.

Honda began producing automobiles shortly thereafter, and now is one of the ten largest such manufacturers in the world.  Many are made in America and sent to Japan; more in fact than are exported to America from that country.  One of Honda’s products is the CR-V, which perhaps stands for “compact recreational vehicle”.  It has been produced since 1995, and originally was a knockoff of the Civic.  Since the cancellation of the Honda Element, it has moved into the entry-level SUV slot for the company.

A recent test that I conducted was of a 2015 Honda CR-V Touring model in a Copper Sunset Pearl paint scheme with black leather interior.  It had an M.S.R.P. of $33,775.00, including freight of $880.00.  As a Touring CR-V, it came with a lot of equipment such as navigation (7″ screen), heated seats, power memory driver seat, lane watch system, radar cruise control, moon roof, power tailgate, high end alloy wheels, fancy roof rails, fog lights and 7-speaker XM stereo.  The lane keeping assist arrangement allowed me to drive down I-25 without touching the steering wheel and the lane watch camera peeked at the blind spot on the passenger side (to the rear) for ease of lane changing.  In town the system is particularly helpful as a right turn is anticipated.   The leather seating inside the Honda was supportive and attractive with room for five adults.

Styling from Honda on this crossover is improved and slightly updated for 2015.  I’ve always admired the CR-V styling, and the new one was perfectly suitable to my eyes.  I particularly like the paint color, and although the wheels were not anything that I was wild about, others that saw the Honda made positive comments about them on a couple of occasions.  They were 2-tone 18″ x 7″ alloys fitted with P225/60R18 Dunlop AT20’s, and with that aspect, the ride was great.

As my test of the Honda CR-V unfolded, I found myself becoming pretty familiar with, and fond of, the car.  Honda sells almost 30,000 of these each month in the U.S., and it is evident why Americans find it so appealing. 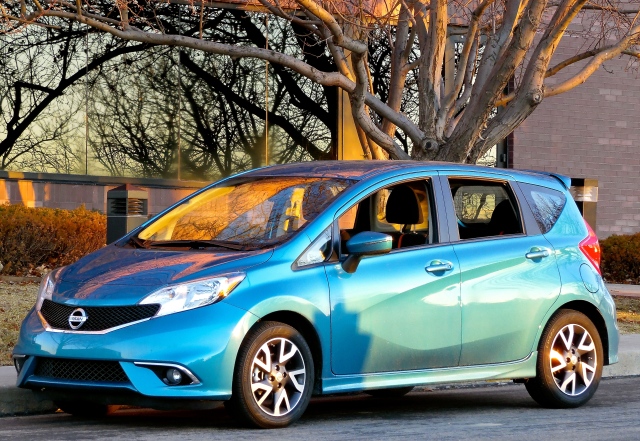 A Versa Note SR was delivered to me last week for reviewing, and the first thing I noticed was that it was a model I had never tested (nor seen) before.  It was more attractive than prior Notes in that it had interesting ten-spoke black-accented wheels and lower-body sporty fascia on both ends of and the sides of the car.  This Note is 11.7” shorter (at 163.7”) than the Versa sedan that Nissan sells while resting on the same wheelbase of 102.4”.  Thus, maneuverability is enhanced in this car without a reduction in interior space.  My test Note was painted Metallic Peacock (blue-green) and inside it was equipped with charcoal sport synthetic suede seating for five.  Not only does it seat five, it does it quite comfortably and has a large 18.8 cubic foot cargo compartment behind the back seats.  Two buckets are up front and in the rear is a 60/40 split fold down bench seat with plenty of legroom for back seat passengers.

The cloth front buckets have a console in between, a single armrest attached to the driver’s seat, and also a hand brake that I always prefer.  Four cup holders are included as are power windows and locks, cruise control, steering wheel audio controls, intermittent wipers, Bluetooth phone setup, Ipod interface, remote keyless entry, power mirrors, and MP3 playback stereo.  As an SR, the car is also equipped with a rear vision camera and satellite radio.  The car has five doors counting the hatchback, 16” alloy wheels with P195/55R16 Bridgestone Ecopia Grand Touring EP422 low rolling resistance, all-season radials, chrome-trimmed fog lights, and chrome accented mesh grill.  Under the hood rests a 1.6 liter, four cylinder, DOHC, 16 valve engine that puts out 109 hp with 107 lb. ft. of torque.  Redline is 6000 rpm, and reportedly 0 to 60 time is 9.8 seconds.  Fuel economy ratings are 31 city and 40 highway, 35 combined (10.8 gallon tank), and I observed 35.9 mpg during my week at the wheel.  That is pretty darn good for running around, mostly in town.  As usual, I took a trip to Denver on the Interstate, and found that the ride and handling were compliant, and wind noise was minimal.

Base M.S.R.P. for the Note SR is $17,530.00, as my test car was equipped with the CVT automatic transmission, SR convenience equipment package ($660.00), carpeted cargo and floor mats ($180.00), and freight ($825.00).  The total came to $19,195.00.   CVT stands for continuous variable transmission, part of the PureDrive system on this 2015 Nissan Versa Note, enabling the car to exceed next year’s Cafe fuel economy and CO2 emission standards.  In addition to the transmission, this PureDrive Versa Note has aerodynamic body styling, friction-reducing micro-finished engine components and variable valve timing.  I earlier bragged about the fuel economy, and these features are the reason why.

My week in possession of the Versa Note was pleasing, both to the senses and the pocketbook.  I would like a different color, but seven alternates are available, as are 3 other models that are less expensive.  The Versa Note SR is a little car I could see myself owning.