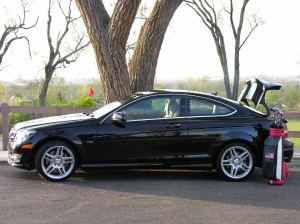 I left the hyphen out of the brand name of the car I drove last week because that is what Janis Joplin did when she wrote, and titled as such, her final song in 1970.  Her lyrics read “Oh, Lord, won’t you buy me a Mercedes Benz?”  In the hit, she also made requests for a color TV and a “night on the town”, but seemed to emphasize her desire for the car with two verses that alluded to the brand.  Mercedes-Benz, the car, has a hyphen, but it’s pretty evident what Joplin wanted when she recorded the tracks on October 1st of that year.  They were the last ever recorded by her, because she died on October 4th, 1970, at age 27.  In 1971 she became one of only two artists in rock and roll history with a posthumous number one U. S. singles hit.  It was her only such hit, “Me and Bobby McGee”, and Otis Redding was the other artist with “(Sittin’ On) The Dock of the Bay”.

The Mercedes-Benz brought to me last week was the rear-wheel drive C350 Coupe with a 3.5 liter, 302 horsepower V-6.  Engine torque was 273 lb. ft., and a seven speed automatic transmission was bolted to the power plant.  At our altitude, zero to sixty acceleration time is 6.5 seconds, and at sea level that number is reduced one half second.  Top speed is reportedly 155 mph.  Handling and manners on the highway were superb – in fact, I liked this car out on the road like no other.  It had upgraded Bridgestone 225/40R18 Blizzak LM60’s on 18” ten spoke AMG alloy wheels – part of the “Advanced Agility Package” on the car that added $1,400 to the M.S.R.P.  Other add-ons included backup camera, service package, keyless entry, lighting package, lane tracking radar, and nav/radio/Sirius stereo (including weather radio) that together put $5,090 onto the sticker.  Those items plus freight brought the total to $49,735.00, and the car came standard with a large panoramic moon roof.  Wheelbase on this car was 108.7”, length – 180.7”, width – 69.7” and the weight was 3,497 lbs.

Mercedes likes to say that the interior of the C350 has a “lounge atmosphere”, and it IS nice.  Access to the back seat on this two-door is OK, and all four passengers get to sit in a full almond leather bucket seat.  The dashboard has a little retro look to it, with the navigation screen incorporated in the center.  With the radio on, a needle is moved back and forth for tuning it, like one in an old pickup or something.  It’s kind of cute.  The trunk holds 12.4 cu. ft. of cargo and the trunk lid has a good looking spoiler attached.

Styling of the Coupe is top notch, with big BI-Xenon headlamps that include the active curve illumination feature.  The car has sport body styling fascia down the side and dual exhausts with chrome finishers at the rear.  It has the B-pillars on the side of the car with back windows that don’t roll down.  That’s pretty much the standard nowadays, but I remember the first time that I saw such a car (a ’73 Pontiac Grand Am), I wasn’t so forgiving.

Back to Janis Joplin; another hit of hers that comes to mind is “Piece of My Heart”, from 1968.  She at that time was a member of Big Brother and the Holding Company.  Moments ago someone other than myself drove off in the Mercedes C350, and I think the car took a little “piece of my heart” with it.