The number one selling Volkswagen is the Jetta, produced since 1979.  It is currently in it’s sixth generation form, this new design having been introduced in June of 2010 as a 2011 model.  For 2015 the Jetta received a mid-cycle update in the front/rear styling and in standard equipment offerings.  A Platinum Gray metallic Jetta SE four-door sedan was brought to my home on a recent Monday morning, and I immediately got inside to check out the optional equipment.  Heated leatherette seats, heated mirrors, and Sirius satellite radio: check.  Power lumbar “V-tech” Titan black leatherette bolstered buckets  and leather wheel: check.  Touchscreen radio/CD changer and Bluetooth and IPod connection: check.  Pushbutton start (on the console along with the emergency brake) and five-speed manual transmission: check.  Although most of the buzz with Volkswagen has recently been about the new masculine (supposedly) Beetle introduction, this Jetta is almost the newest VW in the lineup and, as mentioned earlier, the most popular.  It’s easy to see and feel why, because this is a real nice car.

I jumped in and took off for Interstate 25 for a test drive and a chance to do some mall shopping somewhere along the way.  A real firm ride is in store for the operator; a feeling of quality (and quietness).  The steering wheel is rather thick with many controls, and the five-speed transmission quite manageable.  The turbocharged four cylinder (EA888), 1.8 liter, 170 hp (6,200 rpm) engine provides an ample amount of power.  More, in fact, than would seem available with that horsepower rating.  Torque is 184 lb. ft. (1,500 – 4,750 rpm), and the highway fuel economy rating is 37 mpg on the highway, 25 mpg in the city, and a combined mpg figure is 29.  The fuel tank holds 14.5 gallons.

Guiding the Jetta up the Interstate is pleasurable.  Once again, the ride is firm, but handles the aging Interstate quite well. I had plenty of punch for changing lanes and running by service trucks and seniors.  At the mall parking lot I stepped outside to view the styling of the VW.  It’s good, if not spectacular, and looks particularly nice from the front with the new 2015 grill treatment.  The mirrors have lighting stripes on them and up front are good-looking fog lights.  The Jetta has a wheelbase of 104.4″, overall length of 183.3″, and the car weighs 3,047 lbs.  Backseat legroom is suitable for a big human being, and the trunk is the biggest in its class, at 15.5 cubic feet.  In the center of the back seat is a flop-down armrest/cup holder, and this VW had no power moonroof

BRRRRR!  It’s cold and wintery as I conduct this mid-January test of the Toyota Sienna minivan from the Rocky Mountain Redline press fleet.  The front-wheel drive system works well getting my wife and I around Northern Colorado, and thankfully, no blizzards took place this month; just a couple of nice snowfalls.  Front and rear heat is on hand in the Sienna so that I can warm up the vehicle pretty fast with zero degree temperatures to contend with.  That system includes air conditioning and is a three-zone setup with separate temperature controls for driver and passengers, both front and rear.  A digital control panel is ceiling-mounted in the rear of the Sienna.

Toyota’s Sienna SE Premium comes in five different colors and the one I drove was painted Salsa red pearl metallic.  Of course the vehicle was equipped with power sliding side doors (they have roll-down windows) and a power rear lift gate.  The length of the Sienna was 200.2″ set on a 119.3″ wheelbase; weight was 4,560 lbs.  Getting in and out of the minivan is easier than a sedan and not quite at a crossover SUV level of convenience.  Visibility is great, as is ride and guidance on the road.  Handling is, well, as you would expect for such a vehicle, that being OK.

Minivan styling is not an attraction to such a vehicle, although I personally like the looks of all of them.  This Sienna had bold-looking six-spoke gunmetal-finished gray 19″ alloy wheels with P235/50R19 steel all-season radials.  Luggage rail cross bars were up top and round fog- and backup-lights dressed up the fascia, front and rear.  The color was particularly attractive on the Sienna, a selection I would make if purchasing one.

Power for the Toyota minivan is produced by a 3.5 liter V-6 with 266 horsepower and 245 lb. ft. of torque.  A six-speed automatic is coupled to it with the shift tower mounted on the dashboard to the right of the steering wheel.  Thus, the driver (or front passenger) can slide over to the other armrest-equipped bucket seat, if desired.  Fuel economy for the Sienna is 18 mpg in the city and 25 mpg on the highway.  The combined rating is 21 mpg.  I found the performance of my test Toyota to be suitable, and the company also offers an all-wheel drive setup on the Sienna.

Toyota has been building Camrys since 1982, and the car was originally a compact sedan.  Now it has evolved into a midsize automobile, and year after year the company sells over 400,000 of them.  I drove a new 2015 Toyota Camry Hybrid during the past few days, all over Northern Colorado as well as to Denver, and I found out that I like this new 2015 more than the 2014.5 that I had in the fall.  It was the styling that won me over, as this new sedan has virtually all new body parts (everything but the roof), and is quieter, roomier, and even a little sportier.  I was more of a fan of the 2007 (through 2011) Camry styling than I was of last year’s, and now this 2015 gets me back as a big booster.

The Camry Hybrid has a power train consisting of a CVT delivering power to the front wheels from its hybrid system.  I have grown pretty accustomed to the CVT transmission setup in the Camrys; that includes both this one and the 2014.5 that I tested in the fall.  CVT stands for continuously variable transmission (no shifts), and it is coupled to a gasoline 4 cylinder, 2.5 liter motor with 156 horsepower (@ 5,700 rpm) and 156 lb. ft. of torque (@4,500 rpm).  Two electric motor/generators are on board to add in 141 more horsepower and 199 lb. ft. of torque.  Combined power rating is 200 horsepower, and as I mentioned, it was pretty suitable for driving the midsize sedan.  I liked the ride and handling better than last Camry I had, and styling (as I have mentioned) is great from all angles.

The Toyota Camry Hybrid mid-size FWD sedan has been available for eight years, and over the winter has been available in showrooms in its third generation configuration.  My test Camry was equipped to the tune of $32,233.00, M.S.R.P.   The base price of $27,995.00 for the SE model had as additions the blue illuminated door sills ($299.00) remote start ($499.00) four season floor mat package ($325.00), premium navigation/audio package ($1,300.00), moon roof ($915), and wireless charging system ($75.00).  Freight charges came to $825.00.  The car came in “blue crush metallic” paint and the cloth seating was a light gray in color.  It’s a five passenger sedan with a decent sized rear passenger compartment and a 15.4 cubic foot trunk.  It comfortably seats five adults.  Miles-per-gallon fuel economy ratings for the car I drove were 40 City, 38 Highway, and 40 Combined.  The fuel tank holds 17 gallons of at least 87-octane regular unleaded gasoline. 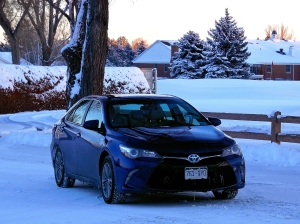 My test automobile was equipped as an above-average midsize sedan. On hand were such items as a good JBL stereo, 6.1″ touchscreen for nav and backup, fancier dash materials for 2015, sport cloth SofTex seating, satellite radio, 17″ alloys, and Bluetooth.  Wheelbase of the Camry is 109.3″, length is 190.9″, and weight of the SE is 3,565 lbs.

There is a reason the Camry is America’s best selling car (almost 30,000 sold in November of 2014), and I experienced it firsthand this week with the SE Hybrid.