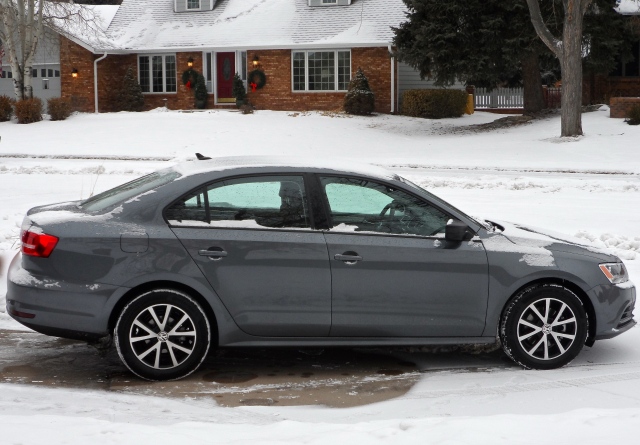 The number one selling Volkswagen is the Jetta, produced since 1979.  It is currently in it’s sixth generation form, this new design having been introduced in June of 2010 as a 2011 model.  For 2015 the Jetta received a mid-cycle update in the front/rear styling and in standard equipment offerings.  A Platinum Gray metallic Jetta SE four-door sedan was brought to my home on a recent Monday morning, and I immediately got inside to check out the optional equipment.  Heated leatherette seats, heated mirrors, and Sirius satellite radio: check.  Power lumbar “V-tech” Titan black leatherette bolstered buckets  and leather wheel: check.  Touchscreen radio/CD changer and Bluetooth and IPod connection: check.  Pushbutton start (on the console along with the emergency brake) and five-speed manual transmission: check.  Although most of the buzz with Volkswagen has recently been about the new masculine (supposedly) Beetle introduction, this Jetta is almost the newest VW in the lineup and, as mentioned earlier, the most popular.  It’s easy to see and feel why, because this is a real nice car.

I jumped in and took off for Interstate 25 for a test drive and a chance to do some mall shopping somewhere along the way.  A real firm ride is in store for the operator; a feeling of quality (and quietness).  The steering wheel is rather thick with many controls, and the five-speed transmission quite manageable.  The turbocharged four cylinder (EA888), 1.8 liter, 170 hp (6,200 rpm) engine provides an ample amount of power.  More, in fact, than would seem available with that horsepower rating.  Torque is 184 lb. ft. (1,500 – 4,750 rpm), and the highway fuel economy rating is 37 mpg on the highway, 25 mpg in the city, and a combined mpg figure is 29.  The fuel tank holds 14.5 gallons.

Guiding the Jetta up the Interstate is pleasurable.  Once again, the ride is firm, but handles the aging Interstate quite well. I had plenty of punch for changing lanes and running by service trucks and seniors.  At the mall parking lot I stepped outside to view the styling of the VW.  It’s good, if not spectacular, and looks particularly nice from the front with the new 2015 grill treatment.  The mirrors have lighting stripes on them and up front are good-looking fog lights.  The Jetta has a wheelbase of 104.4″, overall length of 183.3″, and the car weighs 3,047 lbs.  Backseat legroom is suitable for a big human being, and the trunk is the biggest in its class, at 15.5 cubic feet.  In the center of the back seat is a flop-down armrest/cup holder, and this VW had no power moonroof