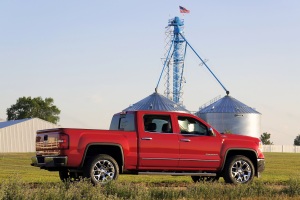 Late last year General Motors introduced the new GMC Sierra at the North American Auto Show in Detroit, Michigan.  The GMC production models are just now showing up at dealer showrooms and Ryan Green, the internet manager at Weld County Garage in Greeley, made a Fire Red 2014 GMC Sierra SLT available for me to test this past week.

General Motors has been producing pickup trucks since 1930 with the dual brands of GMC and Chevrolet accounting for 575,000 units sold in 2012.  For the 2014 model year, the products have been re-designed with sheet metal and drive train improvements.  The V-6’s and V-8’s available in the GMC Sierra now feature direct fuel injection, variable valve timing, aluminum blocks, and cylinder de-activation for economy.

The unit I tested was equipped with the 5.3 liter, 355 horsepower EcoTec3 V-8 with 383 lb. ft. of torque.  Best-in-class EPA fuel economy ratings for the vehicle were 16 city, 22 highway, and 18 overall (26 gallon fuel tank).  Mated to the V-8 was a six speed automatic transmission with a rear axle ratio of 3.42.  The four-wheel drive test truck had active electronic Autotrac with a four position rotary dial for traction selection to the left of the steering wheel.

My wife Ruth and I headed for the Eaton area to take some photographs and she almost immediately exclaimed “Wow, this rides like a car!”.  Indeed, GMC has managed to greatly improve the cabin noise and isolation situation with items such as new cab mounts on the 2014 Sierra – hydraulic at the rearmost position.  As attested to by my wife, ride was fine in the Sierra, and plenty of technology is on hand, including five USB ports, 12v outlets, a 110v outlet, and an SD card reader.  The transmission selector has been located on the steering column because GMC feels busy farmers and businessmen like room in the console for clipboards, markers, PDA’s, etc.

I photographed the Sierra near Fagerberg Farms on Weld County Road 31, and the red pickup looked terrific in the field with its chrome plating on the 20” six-spoke alloy wheels, side steps, and door handles.  This new model’s bold styling has been updated without taking too much risk with what has been a nice-looking truck all along.  And this 2014 design spent more development time in a wind tunnel than any GMC in history.  My test Sierra was a crew cab, and sales of this configuration account for about 60% of overall production. 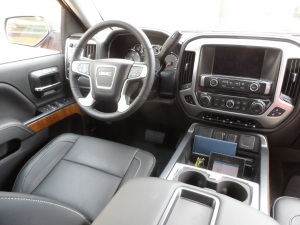 The $50,035 (M.S.R.P.) GMC was loaded with equipment including moon roof, navigation with 8” touch screen, IntelliLink system, Bose stereo, satellite radio, and many other items that would typically be expected in a luxury pickup.  Some features were unexpected, such as foot wells in the rear bumper for climbing aboard, a power sliding rear glass, hill descent control, and 2” of additional legroom for rear seat passengers.  GMC has definitely stepped it up with the introduction of the new Sierra.