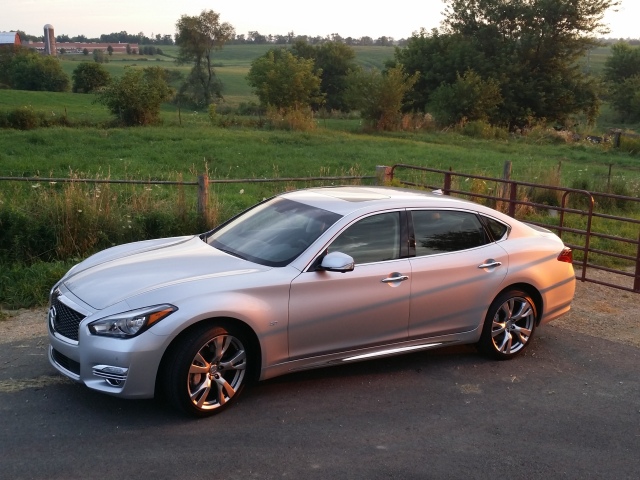 Infiniti is the luxury automobile division of Nissan Motor Company, and has been selling cars and light trucks in North America since 1989.  The history of the company goes all the way back to 1914, when the first “Datsun” was produced in Tokyo.  The Datsun name was subsequently changed to “Nissan”, and the company sells over 5 million vehicles each year, worldwide. The Infiniti models were rolled out concurrently with Honda’s Acura and Toyota’s Lexus lineup;  Japanese government-imposed export restraints at that time made it more profitable for auto manufacturers to send us more expensive cars.

Although at the turn of the century Infiniti nearly became extinct, the lineup has been rejuvenated and today their cars are highly thought of, one of the models

being the 2015 Q70L, a high performance, rear-wheel drive four door sedan with V-6 power.  A Liquid Platinum silver Q70L was waiting for Ruth and I at Chicago’s O’Hare International airport recently and I had the pleasure of wringing it out for a few days in western Illinois.  Inside it had sumptuous Graphite leather seating and Japanese white ash (real) wood trim accents.  It’s a five passenger car with terrific (heated and air conditioned) bucket seats and room for three in the back – heated seating, as well.  All the occupants can be comfortable because as an “L” offering, the car has 6″ additional interior space, specifically in the rear passenger compartment.  As a loaded car it contains the things you would expect as such; heated/tilting/telescoping steering wheel, ten way power buckets, all-around parking/blind spot monitor, power moon roof, push button ignition, dual zone climate setup, Bose 2-channel, 10 speaker audio, 8” VGA color touch-screen navigation display, radar cruise control, and USB/Ipod connections.   M.S.R.P. for the Q70L that I drove was $60,605.00, which included the base car ($51,350.00), deluxe touring package ($3,900.00), technology package ($3,300.00) 20” alloy wheel package ($1,150.00), and freight of $905.00. 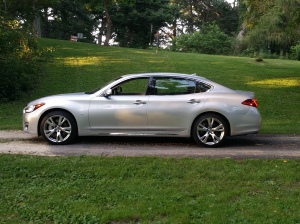 After looking over the Q70L at the airport, my wife and I headed for Galena, Illinois for the weekend.  I wanted to take U.S. 20 to check out the 330 horsepower (270 lb.ft. of torque) V-6 and seven speed automatic with manual shift mode. What a ride!  This machine has some giddyup and is a treat out on the road.  Also, when crossing rails or tar strips the car feels like a block of steel – no shudder, creaking, or shake.  Zero to 60  time is six seconds (3,957 lb. car) and the top speed, reportedly, is governor limited at about 135 mph.  Fuel mileage estimates are 18/city and 26/highway (20 gallon tank), and I averaged about 21 mpg running around northwestern Illinois.  Handling and ride are firm and compliant with real nice steering feel.  Bridgestone RE97as Potenza 245/40R20 radials are wrapped around the ten spoke polished alloys and chrome is on hand both at the lower rocker molding area and on the door handles.  It’s a good looking car.

Once again, I have fallen in love with a car and have failed to register a complaint in the review.  So before I let the big Q go, I’ll mention that the ample space in the rear passenger compartment was so enticing to my mother-in-law that it became necessary to ride all over the countryside with her on board.