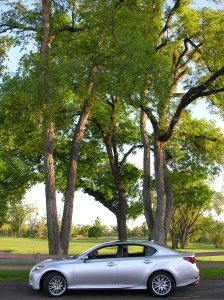 Lexus, Toyota Motor Corporation’s luxury car division, has been producing GS series automobiles since 1993.  The GS lies in the middle of the Lexus sedan lineup, between IS at the bottom and the LS series at the top.  It is in the 4th generation configuration, having been introduced in February of this year.  Three GS Lexus models are offered, or will be, including the GS350 that I drove this week.  The other models are the GS350F and the forthcoming GS450h, a performance hybrid (later this year).

The GS350 that I tested had an all-aluminum V6 (3.5 liter) with 306 horsepower and 277 lb. ft. of torque.  It is mated to a six-speed sequential-shift automatic transmission that includes paddle shifters behind the steering wheel.  It is an all-wheel drive, five-passenger sedan with wheelbase/length/weight numbers of 112.2”, 190.7”, and 3,795 lbs., respectively.  Zero to sixty acceleration is reportedly 5.6 seconds with a top speed of 144 mph.  Fuel economy ratings are 19/city and 26/highway with a 17.4 gallon tank.  Classified as a mid-luxury class performance sedan, the car is really attractive, particularly from the front and the rear.  Each side of the car could use a little more chrome (my favorite finish), as most everything there is painted silver.  But it is nonetheless a stunner, and I noticed it getting a lot of looks around town.

My Lexus came in Liquid Platinum silver metallic paint and the leather interior was black.  The rear armrest was as extensive as I have ever seen, with seat heat and air conditioning controls in the armrest as well as radio buttons, rear window shade control, and of course, the cup holders.  Oh, and don’t forget some storage, as well.  The front buckets are sumptuous, with 18-way power (Eighteen!) capability.  And while on the topic of numbers, how about that split-screen 12.3” multimedia display in the center of the dashboard?  Rear backup camera, navigation, 835-watt stereo, console mouse – all on hand.  I enjoyed the mouse for controlling, well, just about everything electronic.

Driving the brand new Lexus was certainly a pleasure, as I headed out to I-25 for a ride to Ft. Collins.  The ride is adjustable with a knob on the console – actually four settings – normal, ECO, Sport S, and Sport S+.  With the two sport settings the driver gets suspension, steering, shifting, and throttle modifications – plus the gauge cluster gets a red lighting surround effect.  All this makes the console quite busy, but nicely thought out.  Both it, the dashboard, the door panels, and the rear armrest are sprinkled with controls.  But all the gadgets added to, rather than subtracted from, the overall GS350 experience, making it a “recommended” vehicle on my list.