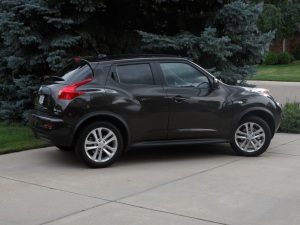 The word “juke” has multiple meanings, but in sports parlance, to juke is to feign or fake out, as for instance a running back might do.  I suppose that is what Nissan had in mind when naming the mini-crossover that they introduced in 2010.  I had one last week to test, a 2012 “SV” all-wheel drive model that came in metallic bronze (dark brown).  Nissan manufactures the Juke in their plant in Oppama, Japan, for the North American market.  Sales figures for the Juke have exceeded the company’s expectations since inception and in June of this year sales were up 52.7% from the same month in 2011.

The Juke is a five-passenger four-door sedan with interesting styling that resembles a frog on wheels.  Parking lamp lenses poke up from the front fenders and into the driver’s view and look pretty cool after dark.  The taillight lenses are visible in the mirrors, as well.  No excuses for driving around at night with a light out in this car!  Speaking of which, another two round headlights are located in the front fascia, rally-car style.  The Juke has a two-door appearance with the rear door handles installed on the C-pillars, a Nissan custom.  Room in the fold-down back seat for three is adequate for all but large adults, and trunk room is 11 cubic feet.  The Juke styling puts somewhat of a restriction on both trunk space and rear seating capacity.

M.S.R.P. of the Juke SV is $23,230, and optional floor mats and freight bring the total to $24,165.  With the SV the owner gets a power moonroof, premium speakers, upgraded cloth seating, keyless entry, pushbutton starter, satellite radio, power windows (4), tilt/telescope, and I-CON.  That last item is Nissan’s Integrated Control system, a dashboard display that provides control and observation of turbo boost, mileage data, climate settings, and, well, everything but navigation directions.  The hand brake is on the console, which is painted like the outside of the car and shaped so that it resembles a motorcycle gas tank.  The shifter is on there, and it controls a continuously variable automatic transmission.  That is all you can get with all-wheel drive, and it is coupled to a 1.6 liter, four cylinder, turbocharged engine.  Horsepower is 188 and torque is 177 lb. ft.  It’s a good power plant, and the transmission is, shall we say, acceptable.  I do like that it allows manual shifting, and that is what I employed on my trip to Vail.  I didn’t care for the turbo lag, but it goes pretty good when spooled up.  Mileage ratings are 25 city and 30 highway, and I averaged 29 mpg during the week.

The Juke all-wheel drive system has torque-vectoring, a nice feature that splits torque up to 50/50 between the front and rear axles, plus it distributes torque from side to the side at the rear axle.  All this makes the Juke handle great, as do the Goodyear Eagle RSA P215/55R17 high performance radials mounted on ten-spoke alloy wheels.  Wheelbase of the 162” car is 99.6”, and the weight is 3,170 lb.

Nissan figured the Juke would sell to male shoppers, but as it has turned out females dominate the purchases – Nissan is happy with the sales, period.  I think the buyers are pretty happy, too.