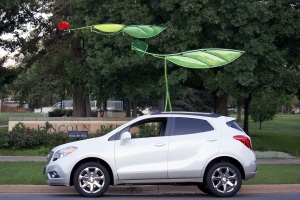 The Buick Encore was unveiled at the 2012 North American International Auto Show 18 months ago and rolled into dealerships early this year.  It is a derivative of the German Opel Mokka and is manufactured in Bupyeong, South Korea.  That German auto name sounds like something that is sold at one of the many Starbucks coffee shops in Greeley.  Buick’s name, on the other hand, is appropriate and gives a family cachet to the Buick SUV lineup, topped off with the bigger Enclave.

An Encore is classified as a luxury compact crossover SUV, and with its size it has no real competition.  I tested one last week, courtesy of Ryan Green at Weld County Garage, and it came in White Pearl Tricoat finish with Titaneum leather-appointed seating inside.  The M.S.R.P. was $32,975, including freight, with a base price of $29,690.  Options included the upgraded paint for $745, chrome aluminum wheels for $995, and a Bose AM/FM/Sirius satellite stereo radio with navigation for $795.

The Encore was the Premium AWD model and it included standard equipment such as a heated steering wheel, power memory driver’s seat, heated buckets, dual zone climate control, and remote start feature.  The car also had rear cross traffic and side blind zone alerts, lane departure warning, fog lamps, rearview camera, cruise, Bluetooth connectivity, ten air bags, tilt/telescope, and OnStar by General Motors.  Keyless entry is on hand with key start, and the hand brake is on the console, like I prefer.  The driver’s front bucket has an armrest for both passengers up front to share.  The back seat is 60/40 and folds down to offer 48.4 cubic feet of cargo room (18.8 is the number when the back seat is erect).  The Encore interior is pretty, and along with the cargo room, is a bit of a pleasant surprise for someone entering the vehicle.

Power for this Buick is supplied by a 1.4 liter, turbocharged four cylinder engine with 138 horsepower and 148 lb. ft. of torque.  The transmission is a six speed automatic with driver shift control.  EPA ratings are 23 city/30 highway, and the tank holds 14 gallons of regular gasoline.  The Encore has a wheelbase of 100.6”, overall length of 168.4”, and weighs 3,309 lbs.  The tires are P215/55R18 all-season radial blackwalls.  It is the shortest Buick every built, and has the shortest wheelbase offered since 1975.  But it drives bigger than the specs indicate, with ride and guidance that is suitable.  And parking?  Wow, what a breeze!

I’ve been admiring the looks of the Encore all year as I see them in the community, so it was nice to get behind the wheel of one.  Lots of onlookers were paying particular attention to the deluxe paint, seven-spoke chrome alloy wheels, deep tinted rear glass, three-stage chrome hood vents, gray cladding, and chrome door handles.  I’d like to have driven the Buick some more, and was only able to travel around Greeley a little with a run out on U.S. 34, where I found highway manners to be fine.  When I got back in town, I pulled through the Starbucks drive-in lane – I had decided I’d like one of those Americanized versions of the German Opel Mokka.