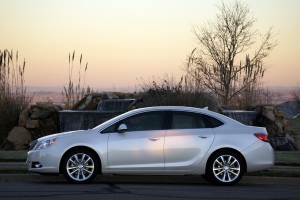 Americans in big numbers are getting into Buick sedans; in fact big Americans are getting into Buick sedans.  I recently reviewed the company’s LaCrosse offering, noting that Shaquille O’Neal drives one in television commercials and is a spokesman.  Another Buick spokesman is Denver Bronco Peyton Manning, seen on television at the wheel of a Buick Verano.  This past week I conducted a test on the Verano such as Manning drives, a 2014 model courtesy of Ryan Green at Weld County Garage in Greeley.

The Verano is a variant of the European Opel Astra, and is marketed in America by Buick alongside the Cruze by Chevrolet, sharing the same architecture and drive train.  The engine is a 2.4 liter, 4 cylinder, DOHC, Ecotec with 180 horsepower.  Torque is 171 lb. ft., and fuel economy ratings are 21 city/32 highway, burning regular and E85 gasoline blend (15.6 gallon tank).  Behind the power plant rests a six-speed automatic transmission with Driver Shift Control. Wheelbase,
length, and weight of the Verano is 105.7”, 183.9”, and 3,300 lbs.,
respectively.  It is a front-wheel drive,
four-door, five passenger automobile.

M.S.R.P. of the little White Diamond Tricoat Verano, officially designated a compact, was $30,515.00, including $925.00 for freight.  The car included the 1SL, or leather (choccachino), package, and was pretty loaded with all the expected amenities including a navigation system for $795.00, Buick Intellilink system, Bose 9-speaker stereo with satellite radio and CD player, moon roof for $900.00, and backup camera.  That camera, along with four windows on each side of the sedan, affords the driver excellent visibility. The deluxe paint job, which was stunning, added $995.00 to the car’s sticker price.  I had several passengers join me in rides during the week, and everyone was comfortable – even the manual right hand bucket seat was well tolerated.  The trunk provided 14.3 cubic feet of luggage capacity.

Driving the Verano was a snap; it felt light on its feet with the power electric steering, and front independent MacPherson strut suspension coupled with a z-link rear setup.  Ten-spoke silver alloy, 18” spoke wheels wore Continental P235/45R18 ContiPro Contact sporty radials, and highway ride and guidance were suitable.  The acceleration, reportedly zero to 60 in 8.5 seconds, was fine, as well.  Buick has put a lot of effort into making this car quiet, successfully.  The car is stylish, as is the custom with the Buick lineup.

Eighteen months ago I reviewed the Chevrolet Cruze, and in looking back at my observations about that car, I would have to say my preference is for the Verano that I drove last week.