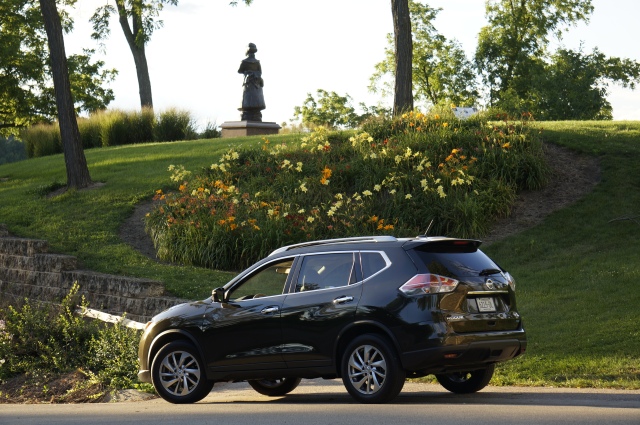 This past week my wife and I traveled to Illinois to visit an elderly relative, see the Cubs/Rockies games at Wrigley Field and test drive a 2014 Nissan Rogue SL all-wheel drive Crossover.  Ruth and I picked up the car at O’Hare and immediately set out for Freeport, Illinois, 100 miles west of Chicago.  Wonderful weather was on hand and responsible for taking some of the grief out of Illinois road construction, particularly on Interstate 90.  Through the windshield I would estimate that I viewed one million orange signs on the vacation.

The Rogue is a popular Nissan offering, and the company has sold nearly 750,000 units since the introduction of the model in 2007.  A year ago I wrote a review of the 2013, first generation Rogue, and at that time their sales were up 13% for the year.  Now I have tested a 2014 Rogue, much redesigned, and as I understand it, sales are up again this year to the tune of 14%.  That percentage also applies to the change in fuel efficiency of this new Rogue, and nicely, it is an increase in such, through the employment of a reduced drag coefficient, among other things.

My test Rogue was an SL model, which is the top offering of Nissan, with leather interior and sunroof.  It was painted Midnight Jade (green) metallic and the interior was almond leather.  M.S.R.P. of the Rogue was $32,395.00, including the base price of $29,420.00, freight of $860.00, and a couple of options.  Those included carpeted floor mats ($125.00), and an SL Premium package ($1,990.00).  The SL Premium package included the following:  power panoramic moon roof, LED headlights with auto levelizers, blind spot warning, lane departure warning, forward collision warning, and moving object detection.  Also included on this SL was 7” touch-screen display, navigation, satellite radio, around-view monitor for parking, power lift gate, and mud and snow tires all around.  They were Dunlop Grand Trek P225/60R18s, and they provided a quiet highway driving environment.

Power for the Rogue comes from a four-cylinder, 170 horsepower engine with 175 lb. ft. of torque.  The all-wheel drive vehicle has an Xtronic CVT (continuously variable) transmission with a sport mode switch and hill start assist.  Acceleration is adequate, but fuel economy is above average for this class of vehicle – 32 mpg highway, 25 mpg city, 28 mpg combined.  This is, after all, a 3,532 lb. crossover.  I observed 25.1 mpg with the Rogue in a combination of highway and city driving for a three-day weekend.  The fuel tank holds 14.5 gallons. 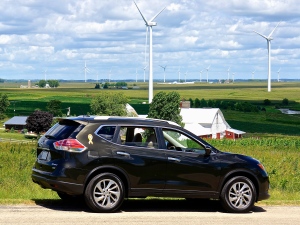 The interior of the Nissan is tasteful, with soft surfaces in abundance and a stylish dash and console.  The front buckets are power, pushbutton start is on hand as well as tilt/telescope, folding 60/40 second row seating, backup camera and Bose 9-speaker stereo.  Luggage space behind all the seating is 39.2 cubic ft.  Ride is good, not sporty, and guidance, visibility and handling are similar in nature.

Styling for 2014 of the Nissan Rogue is an improvement over last year’s offering, and LED daytime running lights adorn the new, bolder front end.  The new car is an inch longer, 1.5 inches wider, and an inch taller than the 2013 Rogue.  Dressy chrome door handles, deep tint rear windows, and ten-spoke alloy wheels all serve to enhance the look, and devotees of the 2013 Rogue can buy what is called the Rogue Select, a carryover SUV.  In front of the Ulysses S. Grant home in Galena, Illinois, a lot of tourists were checking out the Rogue SL.

Inside, the Rogue probably holds the right number of people, whereas a seven passenger Rogue is a bit much.  I have to admit I like the Rogue.  Its evident to me why it is a top seller (#2 in Nissan’s lineup).