I drove the Camry quite a bit this last week, both to Ft. Collins, Boulder and to Denver, and gradually grew pretty accustomed to the CVT transmission setup in the car.  CVT stands for continuously variable transmission (no shifts), and it is coupled to a gasoline 4 cylinder, 2.5 liter motor with 156 horsepower and 156 lb. ft. of torque.  Two electric motor/generators are on board to add in 141 more horsepower and 199 lb. ft. of torque.  Combined power rating is 200 horsepower, and as I mentioned, it was pretty acceptable for driving the somewhat big sedan.  The ride, handling, and guidance were all good, and the styling suits me, as well (particularly front and rear).

Fuel economy for the hybrid has been improved for the last two years, and for the time I drove it the reading was 39.5 mpg.  EPA ratings for the car I drove were 40 mpg city and 38 mpg highway – 40 mpg combined.  The fuel tank held 17 gallons of regular gasoline.  The current mileage compilation for the car is displayed on a dial; not digitally.

I mentioned earlier the options on board with this Camry – it was equipped with a moderate amount of equipment, including an 8 speaker JBL stereo, 7″ touchscreen for navigation and backup view, SoftTex-trimmed seating, satellite radio, 17″ five-spoke alloys, Bridgestone Turanza EL400 P215/55R17 all- season radials, tilt/telescope, pushbutton starter, cruise control, keyless entry, power windows/locks/mirrors, and Bluetooth connectivity.

There is a reason the Camry is America’s best selling car, and I experienced it this week with the SE Hybrid. This model will hold up well in the hybrid sales parade, although with the recent gas prices dipping under $3.00 per gallon, it will be a walking parade, not a stampede. 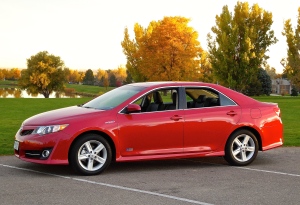