Lexus, Toyota’s luxury automobile division, has built and sold the IS series of sedans since 2006.  The cars are manufactured in the Tahara plant in Aichi Prefecture, Japan, and for 2014 the model underwent an update in body styling, with the drive train carried over from 2013.  For 2015, both the styling and drive train remained essentially unchanged.

I recently tested a new 2015 Atomic Silver IS350, which was equipped with the 3.5-liter, 24-valve V-6 with 306 horsepower (6,400 rpm) and 277 lb.-ft. of torque.  The sedan had a six-speed automatic with paddle shifters and a downshift rev-matching feature that worked like a charm.  Acceleration was fine, and reportedly the Lexus ( this is the smallest sedan offering) will go zero to 60 in 5.6 seconds.  Fuel economy ratings are 19 mpg in town, 26 mpg on the highway, with a 21 mpg overall rating and a 17.4 gallon fuel tank.

The Lexus IS350 styling for 2015 has as its main calling card the new “spindle” grill found on their entire lineup in some form.  The IS that I drove had black horizontal bars inserted in the grill along with dramatic inset LED daytime running lights and fog lights on the front of the car.  The IS body styling features a scalloped crease that sweeps up just ahead of the rear wheel-well, and an integrated rear spoiler is molded onto the trailing edge of the trunk lid.  The dark gray alloy wheels have ten spokes, and are fitted with Bridgestone 225/40R18 Turanza EL400’s, with all-season tread.

Speaking of all seasons, the IS has a mode selector (on the console) that includes a snow setting for winter driving.  For the other seasons, ECO, sport, and normal modes are on hand for a total of four settings.  My Lexus was an F Sport iteration of the IS, which has more capable underpinnings for track-like performance.  An exhilarating intake-noise sound generator kicked in when accelerating, so the car seemed more exciting than it actually might have been.  It was enjoyable. 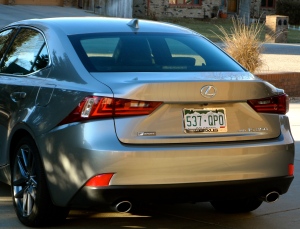 Inside the new IS350, an additional measure of legroom has been added (about 1”, both front and rear), and the “mouse” has been retained on the console for controlling the infotainment system.  The screen on the dashboard is 7”, measured diagonally.  The IS features a moon roof, push button starter with proximity keyless entry, heated power leather bucket seats, 60/40 fold-down rear seat, ten airbags, Mark Levinson 16-speaker stereo, navigation system with rear facing camera, lane departure/blind spot/rear collision warning system, and power windows, locks, mirrors, with power tilt-telescope steering column.  Seating is supportive and comfortable and the trunk can hold 13.8 cubic feet of cargo.