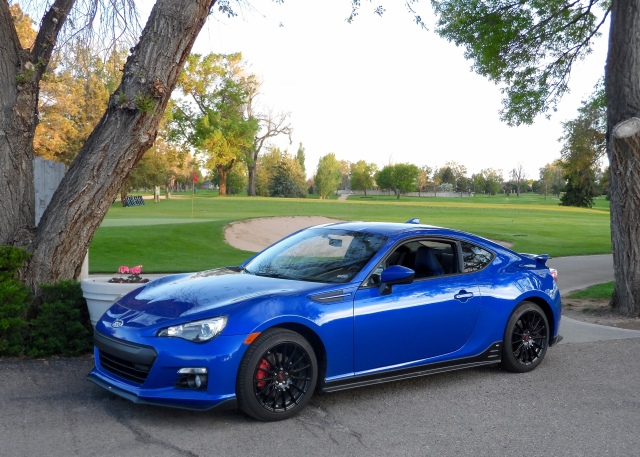 Subaru and Toyota joined forces a few years ago to produce a rear-wheel drive sports car and in 2013 they introduced what Subaru named the BRZ.  Subaru provided the engine for the unit and even landed the job of producing the car for both companies.  The Subaru name (BRZ) denotes boxer engine (B), rear-wheel drive (R), and Zenith (Z), which means a point in time when something is most powerful and successful.  Toyota put out their sports car with a Scion nameplate and named it the FR-S.

I found a 2015 BRZ Series.Blue in my driveway last week courtesy of Rocky Mountain Redline, and the driver came to the door with the keys.  Actually, I didn’t need the keys in my hand when I left the neighborhood because the Subaru has “keyless access and start”, allowing you to enter and drive with the keys in your pocket.  This BRZ had the big red “STI” starter button because of its designation as a Series.Blue, a limited production model (limit, 1,000), with a lot of other special equipment on hand, as well.

Subaru has built 500 of these WR Blue Pearl metallic BRZ’s (they are done), and 500 Crystal White Pearl ones.  All of them have as upgrades the following items:      black STI front, side, and side-rear under spoilers for keeping the BRZ well-grounded at high speeds, red-finish brake calipers that can be seen between the spokes of the wheels, special 15-spoke black painted STI wheels, and the special red illuminated engine start/stop button.  Also, the car sports leather and Alcantara upholstery featuring blue leather seat bolsters and head restraints. The unique color continues with Blue stitching accents on the seats and the blue and black leather-wrapped steering wheel, as well as the shift lever boot and leather-wrapped parking brake handle.

Interior appointments of the Subaru included audio/navigation system, cruise control, heated front seats and mirrors, power windows, Bluetooth phone connectivity, and AM/FM/XM/CD radio.  Ruth and I drove to Denver and back in the car and the seats did not annoy, the guidance on the highway was great, and road noise was suitable for such a car.

The BRZ, trimmed-out as nicely as it was, still shines brightest on the road.  It is powered by a 2.0 liter, four cylinder boxer aluminum engine that provides 200 horsepower (@ 7,000 rpm) and 151 lb.-ft. of torque (@ 6,400 rpm).  The punch-counterpunch action of the boxer pistons in the Subaru cancel each other out and provide a smooth delivery of power.  Also, the horizontally opposed engine results in a lower center of gravity in the vehicle (18”), aiding the handling and cornering characteristics.  Porsche and Subaru are pretty much it when it comes to boxer automobile engines, and the design is found in some BMW and Honda motorcycles.  The motor was patented by Germany’s Karl Benz in 1896.  Fuel economy ratings on the BRZ are 22-city, 30-highway, and 25-combined miles per gallon.  The car burns premium unleaded gasoline, and the tank holds 13.2 gallons.

My test BRZ had a six-speed manual transmission, and what a pleasure it was to operate with a snick-snick short-throw shifter/linkage setup.  A sport-tuned suspension is installed along with a Torsen limited-slip rear differential and 4-wheel disc (11.5″) brakes.  Reportedly, the 2,800 lb. BRZ travels from zero to 60 in 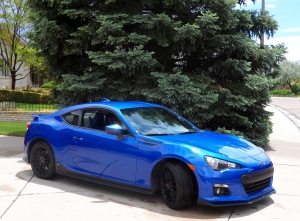 6.4 seconds.  The black wheels are 17″ in diameter and are fitted with P215/45R17 Michelin Primacy HP summer radials.