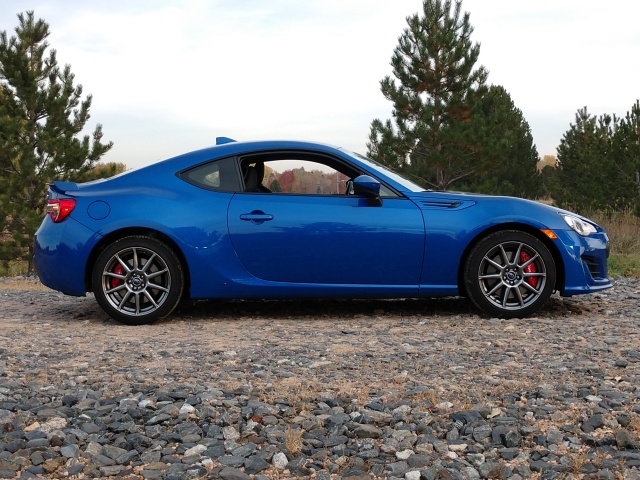 Subaru and Toyota joined forces on a joint effort to build a rear-wheel-drive sports coupe during the previous decade, and in 2012  Subaru’s version hit the showrooms as a 2013 model and was named the BRZ.  Subaru handled the lion’s share of engineering of the sports car and installed their vaunted “boxer” engine in the vehicle.  The BRZ moniker denotes the boxer engine, rear-wheel-drive, and Zenith.  Zenith stands not for an old television, but for “above”.

I found a 2017 BRZ Limited in my driveway for testing recently, with keys slipped through the mail slot in my home.  I didn’t have to insert the keys in the BRZ because the Subaru has “keyless access and start”, allowing you to enter and drive with the keys in your pocket.  This BRZ was equipped with the 6-speed manual transmission, and I was able to handle the transmission rather easily.

The BRZ is powered by a 2.0 liter, four cylinder boxer aluminum engine that provides 205 horsepower and 156 lb.-ft. of torque.  The punch-counterpunch action of the boxer pistons in the Subaru cancel each other out and provide a smooth delivery of power.  Also, the horizontally opposed engine results in a lower center of gravity in the vehicle (18”), aiding the handling and cornering characteristics.  Porsche and Subaru are pretty much it when it comes to boxer automobile engines, and the design is found in some BMW and Honda motorcycles.  The motor was patented by Germany’s Karl Benz in 1896.  Fuel economy ratings on the BRZ are 21-city, 29-highway, the car burns premium unleaded gasoline, and the tank holds 13.2 gallons.

I took a spin over to Loveland in the BRZ and took a detour north on the “Jackrabbit Trail” for some winding road driving.  I’ve found that recently most folks around Greeley don’t use that name for Highway 257, but when I arrived in this area in 1979, that was what the road was called.  I think it came from an early name for the Mad Russian over near Milliken.

On the drive the BRZ exhibited its nature as a true sports car with 4-wheel independent suspension, and 4-wheel disc (11.5”) brakes.  Reportedly the 2,800 lb. car travels from zero to 60 in 6.4 seconds.   Inside, the Limited has black leather seating trim with Alcantara (suede-like) inserts to keep the occupants from sliding around, and Subaru has installed a 6.2” touch-screen navigation/infotainment system in the BRZ.  Also on hand are dual-zone air conditioning, Bluetooth capability, satellite radio, and USB/Ipod connection.

Ruth and I took the BRZ to the factory outlet stores and I noticed that the shoppers  were taking a good look at the Blue Pearl Metallic BRZ in the parking lot, admiring the ten-spoke dark gray alloy wheels with 215/45R17 Michelin Primacy HP summer radials, dual exhaust tips, and trunk spoiler (it’s atop a 7 cubic ft. compartment).