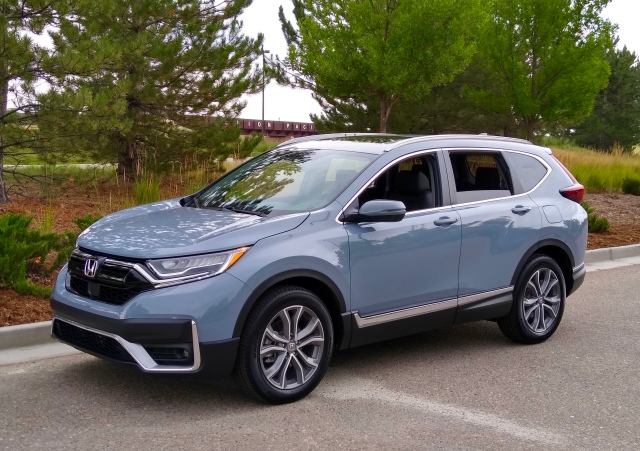 Honda Motor Company started exporting motorcycles to America, from Japan, in the early 1960’s with a clever slogan, “You Meet the Nicest People on a Honda”.  I became  an early customer when I purchased a new 1964 Honda while in high school in Grant,  Nebraska.  All three Wright brothers eventually bought Hondas, and of course mine was the smallest, the Honda 50, a little machine I rolled past the Perkins County fairgrounds on thinking I would impress those patrons inside with my little exhaust report. 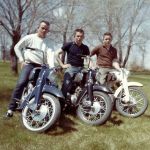 It was later, in the 1970’s, that Honda started exporting automobiles to the U.S., and in 1997 they sent their first in-house designed sport utility vehicle, the CR-V to our shores.  The CR-V (compact recreational vehicle) is based on the Civic sedan and is currently in its fifth generation configuration.  Sales of the CR-V started off at 67,000 in the first year and they have swelled to over 300,000 per year for the last seven years.

press fleet, and I drove it for a week.  The CR-V comes in a hybrid, LX, EX, EX-L, and Touring edition, which is the top model and the one I tested.  For $35,845.00, including freight, the Touring edition has a leather interior, navigation system with backup camera, adaptive radar cruise control, heated steering wheel, lane departure warning, moon roof, and dual heated power bucket seats.

The driving experience when behind the wheel of the CR-V is excellent, with a somewhat quieter environment than the unit I drove in 2018 but with similar guidance, handling, and ride; all good.  Visibility is top-notch, and real-world economy for this reviewer came in at 25.5 mpg, right on target with the EPA estimate.

The mid-sized Honda CR-V rolls on 19” ten spoke alloy wheels with Continental P235/55R19 Cross Contact all season radials.  All CR-V’s were refreshed for 2020, and the power train is now a turbocharged 190 horsepower four with a continuously variable transmission (CVT).

In high school I  fantasized about someday driving an automobile with the quality and innovation of my little Honda 50.  Never would I have imagined that sedans would become so unpopular (along with small motorcycles) and that “sport-utility” vehicles would basically take over the roads.  Nonetheless, someday arrived after a fashion a week ago when I tested the very capable, American made Honda CR-V.  And, I suspect, you still “Meet the Nicest People in a Honda”.