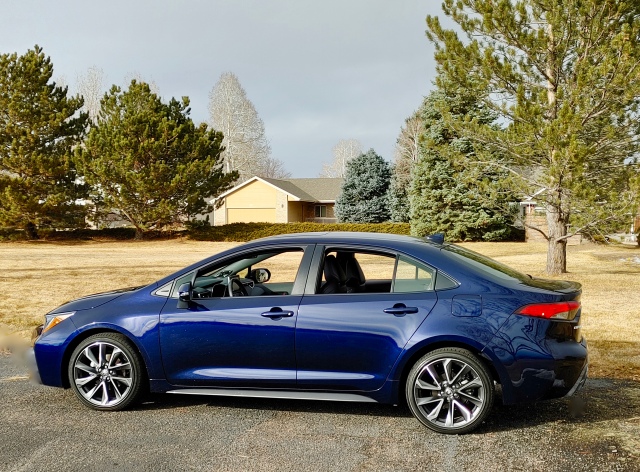 The Toyota Corolla XSE that I was recently able to test came in a pleasing Blueprint blue metallic paint scheme and featured black SofTex seating surfaces.  The Toyota Corolla, one of the best-selling nameplates of all time, has moved over 45 million cars onto driveways around the world (well, mostly driveways), and the car is in its twelfth generation configuration, having been around since 1966. 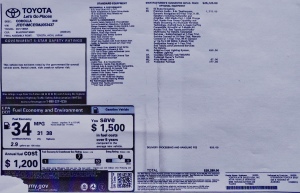 Acceleration, handling, visibility and guidance were all acceptable for the Corolla.  The power was supplied by a 2 liter, 4 cylinder engine, putting out 168 horsepower through a continuously variable (CVT) transmission.  Silver and gray ten-spoke alloy wheels were fitted with P225/40R18 all-season radials on the car.

The 5 passenger interior of the Corolla was comfortable and the seating was supportive and looked good.  The car had a backup camera, 8″ touchscreen, cruise control, power windows/locks/mirrors, tilt/telescope steering column, and keyless entry.  M.S.R.P for my test Corolla came in at $29,289.00, including freight.  The biggest item added to its $25,725.00 base price was a premium audio/navigation package ($1,715.00) consisting of a JBL stereo and dynamic navigation.

The Corolla did a super job for me during the test in Northern Colorado.  The slick styling caught a lot of eyes, the car kept pace at the stoplights, and with the 38 mpg highway mileage rating, I spent a nominal amount of money on gas.  I’d say it is a good value.