I remember the first time I laid eyes on a Volkswagen Beetle, in Grant, Nebraska in about 1963.  A young man in town named Charlie Brixius had purchased a used one (perhaps a 1959), and made quite a splash driving it up and down Main Street over and over.  We all did that back then – gas was cheap, the pace was leisurely, and that was the place to be seen.  The U-turns were made at the same intersections on the north and south end of this town of 1,000 population, and some of the guys out cruising were lucky enough to have a girl sitting in the middle of the front seat for the ride.

Charlie never had a girl sitting in the middle of his front seat, because the “bug” had two bucket seats in the front of the four-passenger, rear-engined, rear-wheel drive VW.  Neither did I, as I rode a Honda 50 scooter/cycle.

Volkswagen Beetles were built from 1938 to 2003, and  over 20 million have been manufactured and sold worldwide since the inception of the car in Germany.  A man named Porsche designed the car, and along with the rear engine placement, the car was air cooled, without coolant or a radiator.

What is commonly called a “New Beetle” with coolant, a front engine, and front-wheel drive, has been marketed on and off since 1997.  Such a car is what was brought to me a week ago for testing, a 2014 Turbocharged Reef blue metallic unit with “R-Line” equipment specified, including a spoiler, “twister” alloy wheels, extra gauges, aluminum pedal covers, and special badging.

Power for my test car was supplied by a 2.0 liter, 210 horsepower (207 lb. ft. of torque) four cylinder gas engine with an EPA mileage rating of 24/city, 30/highway, 26 combined MPG.  The transmission on hand was a six-speed automatic with a manual option that shifted into higher gears in a hurry, but seemed sturdy and somewhat enjoyable.  For having a turbocharger, the engine had a definite grumble to it, belying the high RPM turbo operating in the power department.  Turbochargers whir at about 150,000 revolutions per minute – roughly 30 times as fast as the engine.  They are nice in Colorado, spinning faster at our 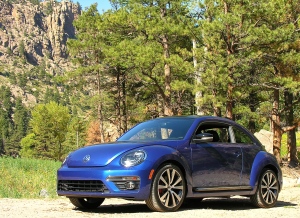 altitude and mitigating power loss that can be associated with naturally-aspirated (i.e. fuel injected) engines.

Inside the Volkswagen, a Fender premium stereo was on hand as well as sunroof, heated leather buckets, Bluetooth connections, navigation, pushbutton starter and satellite radio.  The theme inside was two-toned black and blue and somewhat kicky.  Styling was great with ten spoke polished alloys and attractive black trim work low on the outside.

Acceleration of the VW was fine, road manners were on target, and handling/guidance were acceptable.  It’s a pretty quiet sedan and visibility is fine.  List price was $32,215.00 for the 2014 that I drove and that included freight.  It has a niche market and doesn’t sell over 400,000 per year (in the U.S.!) like the old days, but still has a nice following and a fan in this reviewer.