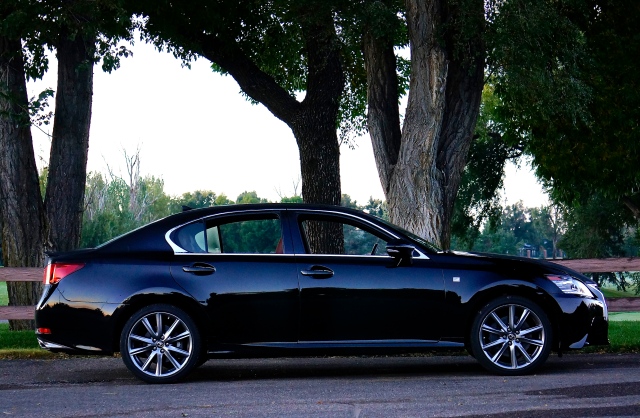 Lexus, the luxury division of Toyota, has been producing the GS series of sedans since 1993.  The new 2014 model that I drove this last week represented the manufacturer’s fourth generation offering, and it came in Obsidian (black) metallic with black leather seating.  The GS Lexus sedan is a midsize performance car with all-wheel drive.

The power train in my test car consisted of a 3.5 liter V6 with 306 horsepower and 277 lb. ft. of torque.  Behind it was a six-speed automatic with manual shifting mode and paddles on the steering column.  The F Sport package on this car included graphite finished 19” alloy wheels (with Bridgestone Turanza EL400, 255/40R19 radials), Adaptive Variable Suspension, Dynamic Rear Steering, and oversized brakes.  It accelerates from zero to sixty in under six seconds and reportedly has a top speed of 131 mph.

Ruth and I drove the Lexus to both Denver and Ft. Collins, and Ruth commented on the sumptuous but sporty ride out on I25.  Of course, the blind spot monitor helped her husband keep the big sedan out of the way of other motorists.  Wheelbase of the car is 112.2”, overall length is 190.7”, and it weighs 3,970 lbs.

The EPA fuel mileage estimates of the GS are 19 and 26, city/highway, and a combined rating of 21 mpg.  During my week driving the Lexus in mostly a city setting, the calculation was 21.5 mpg.  The V6 performs well, and delivers a throaty roar upon hard acceleration.

Riding in the GS is especially comfortable due to the supportive bucket seats with perforated leather black trim and 16-way adjustability.  The driver chooses from three driving modes with a console mounted dial – Economy, Sport, and Sport Plus.  The Sport Plus tightens up the steering and throttle/transmission response; plus it changes the speedometer backlighting to red.  It is a five passenger sedan with a large back seat and a 14.3 cubic foot trunk. 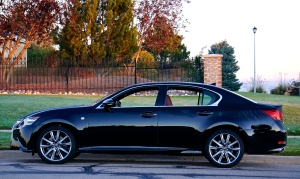 Overall, I would recommend the GS350 to the discerning, performance-oriented buyer with a few extra dollars on hand.  It was a blast to drive around for the week I had it in my possession.