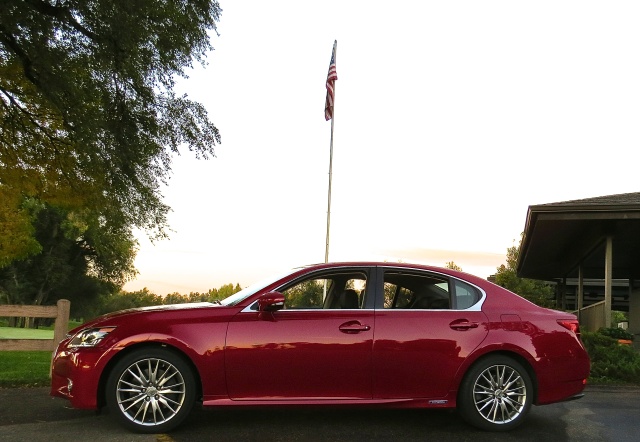 The Lexus GS is a mid-size luxury car sold by Lexus, the luxury division of Toyota.  Its design was originated by Italdesign Guigiaro over a quarter century ago as a simplified, European-looking offering.  The GS is the car that I was loaned to test this last week.  The car is called a GS450h, and the “h“ stands for hybrid drive train, made up of a 306 horsepower Atkinson-cycle V-6 and two electric motor/generators.  Total horsepower of the gasoline/electric package is 338, and the power is delivered through a continuously variable automatic transmission.  Although not officially designated a “sports sedan”, this 4,147 lb. car can go from zero to 60 mph in 5.7 seconds.  Top speed is reportedly a governor-limited 136 mph.

The Lexus GS series of cars has been around since 1993, and is now in its fourth generation configuration for 2014.  Lexus, headquartered in Nagoya, Japan, sent as its first automobile to America the big LS series in 1989.  The company currently manufactures Japan’s top-selling make of luxury automobiles.  The GS models come in a V-6 sports sedan, a high-performance F Sport sedan, and the hybrid (h) model that I tested.

Highway manners of the GS450h are excellent, with an assist from the blind spot monitor to keep the driver out of trouble.  Ride on the Dunlop 235/45R18 SP Sport S100 all-season radials (on 18”, eighteen split-spoke alloys) is silent and responsive, and the driver can select from four drive modes – Eco, Normal, Sport, and Sport+.  In winter the driver can select “snow”, and there is an “EV” (all-electric) selection to made, too.  Lots of options, and lots of performance in the Sport+ mode, especially so for a hybrid vehicle.  While in Sport+, the car provides more shock damping, tighter steering, and improved throttle response.  And all these handling and power characteristics are present in a car that delivered right at 30 mpg for me all week.  Official ratings are 29/city and 34/highway (31 combined).

The GS450h came with Riviera Red paint and the interior was black.  The paint seemed to be two feet thick, and the styling excelled, mostly up front.  No tailpipe finishers were present at the rear, in somewhat of a curious styling move (hybrid?).  But the car is an eye catcher, for sure.

The Lexus GS450h was a treat to test all week, providing this reviewer
with an extra “measure of pleasure’, and the car deserves a good look from the luxury car-buying public.